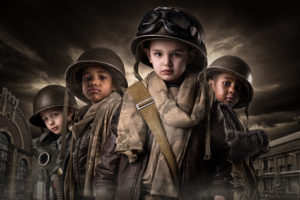 Young boys in soldier uniform in a war zone

I am working on the forward for my new novel Aaron’s War. The book is not a religious book but has some religious overtones.  It is hard to imagine a WWII fiction novel without some religious considerations.

The main character, Aaron, was given his name by his Jewish father and mother. Biblically, Aaron (Ahron) was the brother of Moses and the first High Priest.  In the Pentateuch, the first five books of the Hebrew Bible, which lays out the laws of Moses, fifteen times the Lord spoke to Moses and Aaron. Aaron was known for loving peace and pursuing peace.  Aaron is also an Islamic patriarch and the Quran refers to him as a prophet.  The story of biblical Aaron resonates today as man overwhelms religion with interpretation or cast it aside.

I thought the name was appropriate to one of the messages of the story about Aaron, the gentle soldier who was confused about his own religion in a war where Christians were killing Christians and Germans were attempting to eradicate the Jewish race.